This trip was designed to give female riders an introduction to cycle touring and to explore some special parts of Victoria and NSW along and around the Murray River. The objective was to provide an all female cycle tour that is organised and run by a female - no blokes. The ride proved to be very doable, manageable and enjoyable = fun for all. The route was chosen carefully so riders could build up during the ride - short legs on flat terrain.

The tour started in Wangaratta which is easily accessible by road and rail from Melbourne or Sydney. First up was a ride down the well known Murray River to the Mountains Rail trail to Myrtleford - and then we explored the foothills of the Victorian Alps before making our way to the Murray River at Lake Hume, the first of the big dams on the Murray. From there the tour followed the Murray River, zigzagging across the Victoria-New South Wales border.  We visited delightful small towns such as Corowa-Wahgunyah (in the wine country of Rutherglen), Barooga, Barmah, Koondrook, Moama-Echuca, Lake Boga, Swan Hill, Robinvale and ended in Mildura. This is all farming country with a mixture of wheat, rice and fruit and nut orchards. For the most part, we stayed in the smaller towns and merely passed through the bigger towns. The Murray River plays a central role in Australian pastoral history and carries a million stories of bushrangers and paddle steamers and early aboriginal settlers. It is one of the essences of the Australian way.

Weather April offered stable weather conditions. You will note from the wind map that the area of the ride is in the area of least wind = the centre of the high pressure cell. It was autumn time, so we were not surprised to see overnight temperatures dropping to around 10C with a rise to low 20's C in the days.

Weather - Murray River
The maps below cover wind. We have indicated on the map where the ride takes place 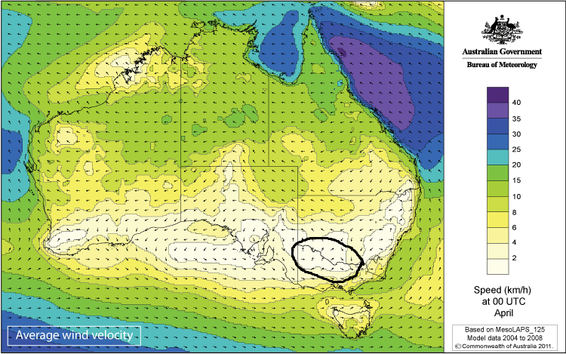