The tour began in Port Augusta at the head of the Gulf of St. Vincent, home to the famed King George Whiting. It ended in Karumba on the Gulf of Carpentaria. This trip traversed Australia in an uncommon direction and crossed a big slice of the Outback and visited some of the great mining and cattle areas of the country.

This is a trip which explored some remote areas of Outback Australia, all without leaving the bitumen. Port Augusta is where the Outback meets the Sea.  Day one we left the sea behind and crossed the Flinders Ranges to Orroroo - this is classic wheat and cattle farming country. The terrain starts to even out with fewer undulations as we headed east towards Cockburn and then into mining country and to Broken Hill - the home of the Big Australian, BHP Billiton (now just known as BHP). There is plenty to see and do in Broken Hill and we took two days off to catch a good slice. From here we tracked East a few more days before making a left turn at Cobar to head towards Bourke, on the banks of the Darling River, Australia's second largest river.

We then crossed the border into Queensland and a long haul across pretty featureless country until we reach the fascinating country town of Charleville, on the banks of the Warrego River and the terminus of the 2nd scheduled air service operated by Qantas all those years ago. We were challenged along the way by mining trucks but all was safely handled by the riders. The route bends a little west and was soon punctuated by the creek crossings that feed Lake Eyre way to the South West.  Before long we reached the Savannah Way at the town of Longreach. From here we then went North West with some long days in the run to Cloncurry. From Cloncurry, we headed North again - this is the gateway to the tropics. The temperature was rising and the vegetation is completely different.

Weather This trip spanned the whole continent in the short time of one month. The weather proved to be quite different as we headed Northwards. Wind was a factor on a few days. Temperatures did rise as we headed north and it got pretty warm.

Weather - Gulf to Gulf
The maps below cover wind. We have indicated on the map the route roughly 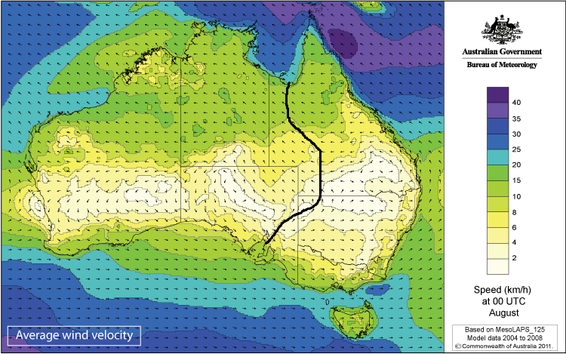